And the violence, caused such silence

Who are we mistaken?

But you see, it’s not me

It’s not my family

With their tanks, and their bombs

And their bombs, and their guns

A zombie: someone who moves around as if unconscious and being controlled by someone else. I was so tired, I walked around like a zombie. (in stories, movies, etc.) A zombie is a dead person brought back to life without the ability to speak or move easily. That is according to the Cambridge dictionary on ‘what zombie means?’ (22th of January 2020)

In the dystopian novel World War Z, Max Brooks describes how, to survive a zombie apocalypse, some humans started impersonating zombies, convincing themselves that if they could become like those who want to eat them, they will not be eaten. Survivors do the same in Shaun of the Dead, a zombie comedy film from 2004. Zombies in old films move slow and in many modern films, they act fast.

28 Days Later (2002), in this film the “zombies” are not really living dead, but rather virus-plagued monsters. I bought Max Brooks’ Zombie Survival Guide book right after I saw Zombieland (back in 2009), but left it barely touched at my parents home. I read some other books about contagious zombie-like virus stories created by governments, but I am not, in particular, a fan of the horror genre. I took a long break from zombies until last winter. That’s when I watched “Resident Evil” being played on the Gamecube. Resident Evil has numerous sequels which I haven’t watched or played through. I began to write about zombies, clones and digital duplicates by the end of January 2020.

Some things changed very quickly since that moment, especially since the coronavirus made its appearance. Empty streets, deserted shops, London’s city centre almost abandoned, residents ordered to stay indoors.. It looked like a zombie apocalypse (from the end of March to the end of May). COVID-19 may not be a zombie plague, but I am not the only one to think “maybe there is something to these zombie movies after all.” 1

25th of May 2020, George Floyd, an African-American man, was killed in the Powderhorn community of Minneapolis, Minnesota by police officers. George Floyd was not the first Black men to be killed by police violence and America is not the only country where these killer cops are employed. It is so weird to witness how fast the (American) government reacted -not to the killing of Floyd, nor to all other acts of blue on Black violence- but to the demonstrations. Their streets were filled again, now with protesters wearing masks. And the police response was as quickly as they were slow to the COVID-19 outbreak. Well equipped with rubber bullets, shields, tear gas and whatnot, they act on this new outbreak. While the government leaves the health workers underfunded. 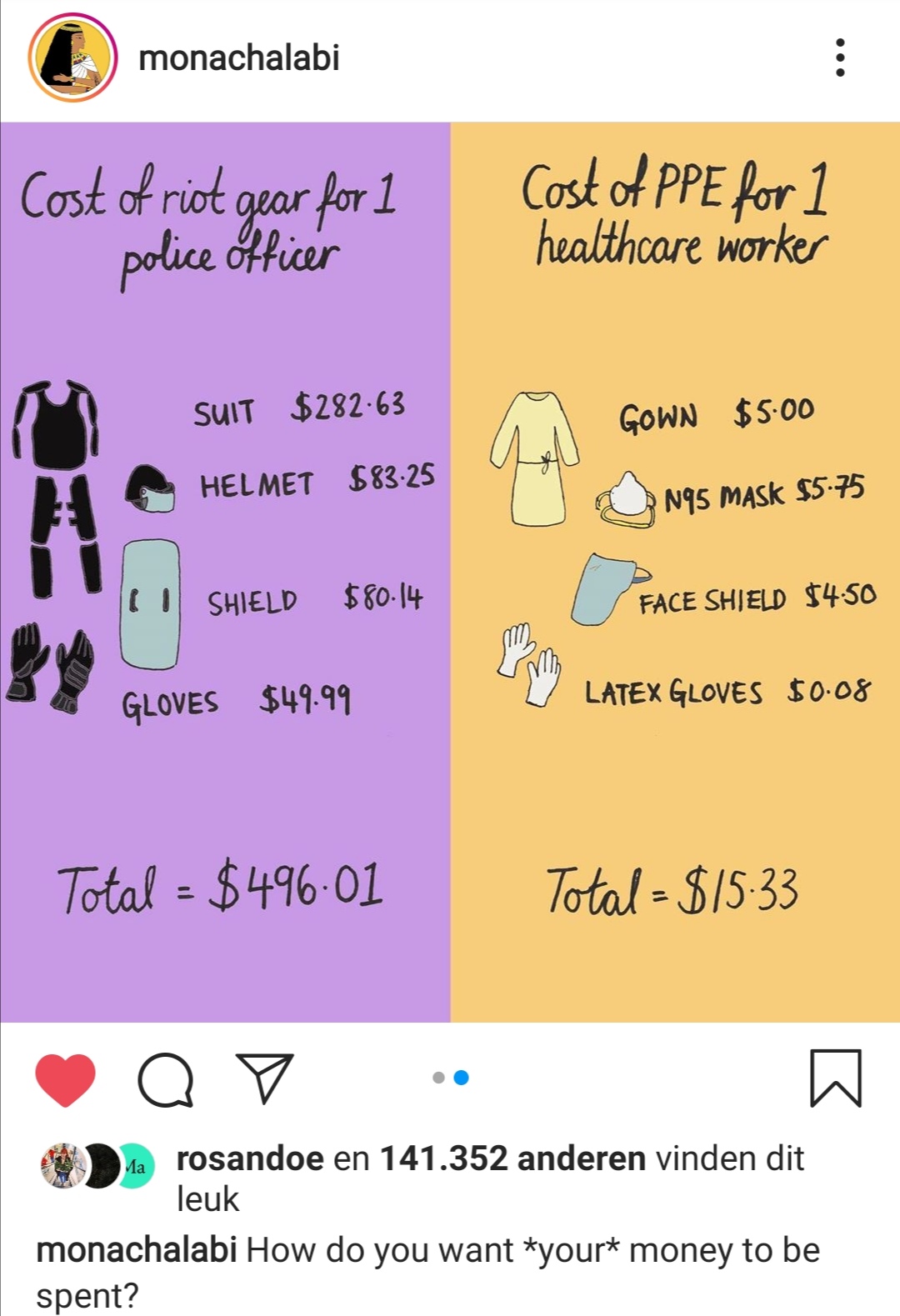 We begged, we prayed, petitioned and demonstrated

“I feel like watching thrillers is a good way to “sharpen” yourself during a long period of isolation and social distancing.” said artist Cao Fei in an interview with Artnet2, so I started watching the Korean series Kingdom on Netflix that she recommended. A crown prince, queen and infected king, (not) death, but undead. (T)his mysterious ‘illness’ spreads across the country. More and more victims infected through a zombies bite and turn almost instantly. [SPOILER WARNING] We learn about a resurrection plant or the bacteria (parasite worms eggs) that live on the plant given to the king, on his deathbed, even before the rumours about his illness started. We learn about “us vs them,” the importance of rulers and those in power. And this “us vs them” is what I noticed in real live too.

Night of the Living Dead

1st of October 1968, the premiere of Night of the Living Dead. It wasn’t the first zombie film, but it is pretty old. Perhaps the first film to have a black man playing the lead role regardless of, rather than because of, his race. The film is good. The protagonist, Ben is not a stereotype, nor a hero. He’s an average guy with strong survival instincts and more competent than the other people he’s trapped with in a zombie surrounded farm house. The undead are not even called zombies in this film, but “ghouls”. “I convinced George that the black community would rather see me dead than saved, after all that had gone on, in a corny and symbolically confusing way.” Besides, said Jones [the actor of Ben], “The heroes never die in American movies. The jolt of that and the double jolt of the hero figure being black seemed like a double-barreled whammy.”3 So at the end of the film, the only survivor and very much alive, Ben is shot dead by the police.

“The show must be paused.”

2nd of June 2020, at least 3,050 Black Lives Matter protests and other demonstrations have been held in the past 2,145 days  in the US and across the world. Their news is too important not to be shared right now. I stand in solidarity with all the communities who continue to suffer racial inequality and discrimination. I stand against any form of racial oppression and violence from individual or state. Now is the time to make our voices heard, to stand up for equality and justice.

Today, lots of people are replacing the entire Internet with empty black squares, as people in this organizing movement are literally fighting for their lives. #blackouttuesday A black squared Facebook-owned Instagram, which is designed specifically to make the hypertextual, readable Internet inaccessible. “The show must be paused” started at two black women working at a major label as a call to the music industry. They are tired. Tired of explaining, drained, traumatized, hurt, scared, and angry by all the news. People of color need a break, everyone else needs to work harder.4 Social media activism does and doesn’t work. Your black square on Instagram isn’t helping, it blocks the news. The corporate world pretends to care with the black square, to ‘stand with you’ without donating a single penny to anything. Sharing (protest) information, linking to places to donate money and goods, and urging your followers to do the same does help. It is a privilege to educate yourself about racism instead of experiencing it.

6th of June 2020, a Black Lives Matter protest on Parliament Square. We stood there surrounded by the statues of Winston Churchill, David Lloyd George, Henry John Temple, Edward Smith, Robert Peel, George Canning (former UK PM’s) Jan Smuts (Prime Minister of South Africa during a period of racial segregation), Abraham Lincoln, Nelson Mandela, Mahatma Gandhi, and one woman; Millicent Fawcett (campaigner for women’s suffrage). People screamed the name of the dead; “George Floyd, say his name!” We stood there with one foot in the grave of our ancestors. Their cold hands of the past have had their gip on us for too long. “We have felt that grip from the moment we were born, so we assume that it is a natural and inescapable part of who we are. Therefore we seldom try to make ourselves free, and envision alternative futures”5 wrote Yuval Noah Harari in Homo Deus. Enough is enough. We have a responsibility to do better. Now is the time to recognise our privilege, and to speak up and to put our words into action.

I kindly ask you to take a look at my sources, since not all -most- of it is -not- my story. This blog is meant to be educational to me and to anyone who’s willing to take this journey with me. I intend to write about topics from discriminatory technology, capitalist ideologies, social media, (black) revolutionary movements, virussen, pop culture, dead art, identity and immortality, zombie work and policing a.o.

P.S. For recommended reading I strongly advise you to take a look at this Google Drive: https://drive.google.com/drive/folders/18y0_2wm85L113fVWYdgljq9uuIlmlbl3

(Thank you michiel teeuw for sharing it with me)